Will Amazonian Maze in Brazil ever come to this version of the game ? 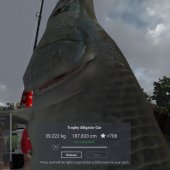 By ianaconda,
March 17 in The Fisherman - Fishing Planet: Questions