Just my thoughts about future development and game features 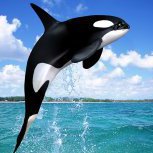 Top Posters In This Topic

Finally have some free time - here I will post some of my ideas and thoughts about future game development. You guys are welcome to reply with ideas or critics as long as it not a toxic and useless po

About fish fight - for a fish, which impossible to catch we want to have no more endless stamina or fish fight. So will move towards reality. Yea. About color - Marker Colors, it's annoying

Think i need to leave it here before i forget it again. Please think about a filter for markers that you can select on the tablet instead of marker colors. It would be way better if you could just sel